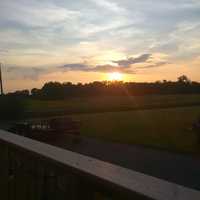 Ohio Parks are waiting for you!

Tucked away in the rolling highlands of southwest Ohio, 1,058-acre Stonelick State Park offers a quiet retreat for visitors. The still waters of the lake and stately woodlands provide the setting for a host of outdoor recreational pursuits.

History
Stonelick State Park lies within Clermont County, the eighth county established in the Northwest Territory. Settlement of the area began in 1798 when the towns of Bethel and Williamsburg were laid out. A considerable amount of the early settlers came from Kentucky, Virginia and Pennsylvania.

Several clashes between the settlers and Native Americans occurred here as the area was situated between the Kentucky settlements south of the Ohio River and Native American villages along the Little Miami River. Legendary frontiersmen, Daniel Boone and Simon Kenton, were among those involved in the conflicts.

The town of nearby Milford was the site of the first Methodist church in Ohio. Francis McCormick, a pioneer Methodist preacher, organized the church in his cabin.

Clermont County was a vital link in the Underground Railroad as it was just across the river from the southern states of Kentucky and Virginia. The position of Clermont on the border made it the first place of refuge for fleeing slaves. The county was also the birthplace of Civil War General Ulysses S. Grant at Point Pleasant on the Ohio River.

Land acquisition for Stonelick State Park began in 1948. A dam across Stonelick Creek was completed in 1950. The park was originally created to provide a wildlife area, but later became a part of the Ohio State Parks system.

Natural Features
By studying the bedrock layers in Ohio, we can find clues that reveal ancient seas, marshes or swamps covered all or portions of the state at various times in the past. Remains of plants and animals that lived in those waters littered the sea's floor and became entombed as lime precipitated to the bottom. Eventually, the lime and other sediments solidified into stone and uplifted forming dry land.

As the Appalachian Mountains were forming to the east, the bedrock layer west of the mountains was elevated, creating the Cincinnati Arch. This dome-like feature of uplifted bedrock passes through the Stonelick region. Several areas of the arch have been exposed from erosion uncovering some of the oldest rocks in Ohio, which are 350-500 million years old. The once entombed fossils are now exposed giving the area one of the richest fossil records in the state. The rocks of the arch contain so many fossils of such diverse species and have attracted people from all over the world since the early 1800s. Trilobite, brachiopods and cephalopods provide excellent finds for fossil hunters.

Another interesting feature of the Stonelick landscape is the significant stand of sweet gum trees. Normally, sweet gum is a subordinate tree, but in the woodlands of Stonelick, they co-dominate the woodlands with beech and maple. Substantial colonies of uncommon Ohio wildflowers flourish here. Dense flying star, purple fringeless orchid and Virginia mountain mint may be found growing in the park.
Website
Facebook

Write a Review
0.0 / 5.0
Overall Satisfaction
Values
Looks like no one has reviewed Stonelick State Park . Be the first by writing a review now!